My name is Christian Martinez. I grew up in Hudson Valley, New York. As a child I loved cartoons and fantasy stories, so I always loved trying to draw the things I saw in books and on TV. When I was in school I did the best I could, but I became infamous for handing in tests lined with sketches and doodles all around the papers. By the time I was in high school I had decided that art is what I wanted to do with my life. All my electoral classes were art related and by senior year I was in the National Art Honor Society. That year I was accepted to Pratt and spent the next two years at their Utica New York campus.
After realizing Pratt was not the school for me, I took a year off and worked retail and odd jobs. One weekend, while looking for potential schools, I received an email from Deviantart from a place called The Kubert School. I had never heard of them before but as I researched the school, I was amazed. A school that teaches art through Comic book art and illustration? This was a dream come true! I begged my parents to let me apply (they were VERY skeptical) and after I convinced them I sent in my application and portfolio.
The rest is history.
I spent the next 3 years at the Kubert school, honing my skills drastically and meeting some amazing artists and friends along the way. I am happy to report that in May 2017 I officially graduated from the Kubert School.

Currently I still reside in Hudson Valley, doing what I love and trying to make a living out of it.

His work can be found in the following titles by Sinopa Publishing:

Tarot Adventures, Book One: The Draw of Glenfallow

Whispers of Persephone (which he illustrated in its entirety)

As work on the project, "The Draw of Glenfallow" progressed, I was fortunate to receive information on one Christian Martinez.

After speaking with Christian, I was looking forward to what he was to produce.  When I received that first concept sketch, I was most impressed... but when I received the piece above... well I nearly fell out of my seat!  Christian had surpassed my expectations, creating and building on our discussions for this image and creating an imposing visage of malicious will.

Christian's work for "The Draw of Glenfallow" has been breathtaking, both in insight as to scene and to execution of the visual presentation.  His work on "Comet over Echo Rock" was equally stunning.  He stepped far outside his comfort zone and delivered horrific visuals for "Whispers of Persephone".

There really isn't a way to overstate Christian's talent.  He may very well be Larry Elmore of his generation. 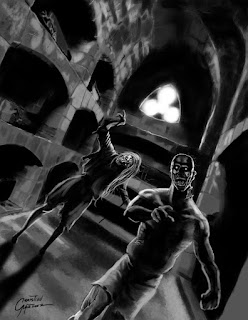 If you want an artist, who can take your vision and breathe it into life, then you want Christian Martinez. 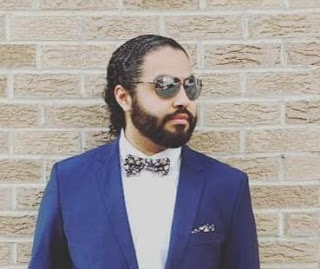